When a project team is international in scope, virtual collaboration – like conference calls and web meetings – is a necessity. But when multitasking creeps in, attention spans deteriorate and on-time performance suffers.

For one Fortune 500 financial services company, communication problems were already hampering a large IT initiative within a month of kickoff. The participation of 25 separate groups in a highly matrixed team structure, compounded by the international nature of the team and the varying degrees of participation over the duration of the project, led to countless unanswered questions and a critically delayed timeline.

That’s when the project manager took decisive action, putting in place a number of crisis communication techniques to rein in the team and salvage the project. The one tool essential to effectively implementing the revised process: OnePager plan communications software.

Cracks in the Foundation

The objective of the IT initiative was the introduction of a new product to increase revenues and improve the client experience. The business domain was very complex, and changes in services were under scrutiny by regulatory bodies. Additionally, the project team was highly matrixed – it included more than 150 individuals in eight different international locations. Despite these complexities and potential challenges, the ambitious project was a high priority. Consequently, most participants were interested and attentive during the first few meetings.

With an extensive communication plan in place, a documented project vision and a web-based collaboration tool implemented, the project was seemingly poised for success. The total project cost was estimated at $150,000, with a phase/gate review meeting scheduled for the end of each month and go-live at the end of Month 4. After a few weeks, however, the first red flags started to surface.

"Multitasking was rampant at virtual team meetings, and the continual failure to uncover important details during these critical collaboration points strongly suggested the team members’ divided attention was impacting the project."

The inception phase lasted much longer than expected due to the constant discovery of unexpected dependencies and requirements. By the end of the first full month, it became clear the first gate review would be missed, leading to a request for an extension of the review. It also became apparent the project budget would likely outstrip the initial estimate. A new detail seemed to be uncovered each week, which frequently meant working with multiple members of another new group.

For example, the final decision on how to handle certain legal and compliance aspects of the project had never been agreed upon; it was just one of a long list of unanswered questions. This lasted month after month, and the schedule had to be revised several times – even requiring updates on a weekly basis.

The executive accountable for the project had to devote valuable time absorbing frequent updates because of constant changes and uncertainty. Worse yet, the business sponsor was having difficulty understanding how something that was estimated to be relatively simple, inexpensive, and quick to develop could be running into such problems.

The root of the problems? Multitasking was rampant at the team's virtual meetings, and the continual failure to uncover important details during these critical collaboration points strongly suggested the team members’ divided attention was negatively impacting the project.

The project manager realized he had to act quickly or lose the commitment of key stakeholders. He recalled a course he had taken on persuasion in project management, which taught that leaders can help establish commitment by increasing participation, creating an atmosphere of belonging, maintaining attention, questioning, telling interesting stories, repeating and repackaging, and generating competition.

Applying these principles, the PM began using dynamic and impactful OnePager timeline summary graphics to engage the team in addressing risks, issues and dependencies, in addition to quickly organizing meetings with subgroups of the overall project. Since most meetings were virtual – conference calls and web meetings – the PM delivered an agenda in advance of each meeting and presented OnePager plan communications to facilitate interest, understanding, and alignment.

The Microsoft SharePoint collaboration site was leveraged to address the need to continuously bring new project participants up to speed. Common documents were referenced, and ultimately a "welcome package" was created with quick links to the project vision, business requirements, workflow diagrams and related documents.

Finally, the project manager utilized custom OnePager timeline summaries to keep discussions focused on the key questions and potential solutions, rather than on specific details of a hard-to-read Microsoft Project schedule. Below is a representative OnePager graphic, similar to those used for the project. This type of visual map kept the virtual project team members “out of the weeds” and focused on the issues that required their attention. 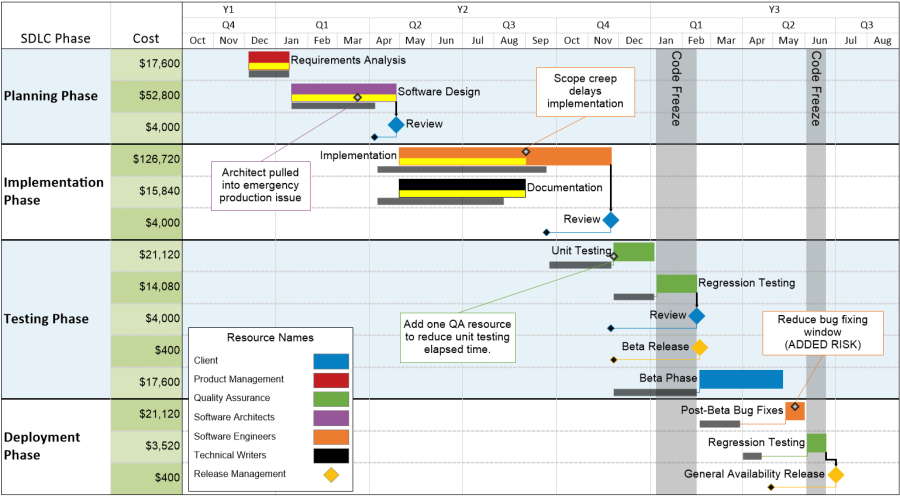 As a result of the delayed discoveries early in the project lifecycle, the time-to-launch increased from four months to 18 months, and the budget increased 500 percent.

Despite such a huge cost differential and a project that appeared to be taking a nosedive, the project manager was able to obtain approval for the revised timeline and significantly inflated cost. He maintained support for the project by presenting a clear and focused plan for salvation, and revalidating the business case with the project sponsors.

A OnePager video presentation showing the evolution of the project and its dynamics played an essential role in this reporting and revalidation process. Further, by grounding the project in facts, a high degree of confidence for total project costs and timing could be shared with the PMO, the business sponsors and executives.

In the end, the PM successfully reengaged the disparate members of the initial project team required to complete the necessary work, and all project deliverables were completed on time and on budget. Without the project manager’s ability to effectively manage the attention of team members in dozens of virtual meetings with participants from around the country and the world, the result would likely have looked drastically different.