We’ve had a few blog posts recently on some of the more conventional uses of OnePager snapshot capabilities, but we hear of our users using snapshots for all kinds of other purposes. Although we all could come up with many, many of not-so-obvious uses, for simplicity’s sake, let’s just consider one here to stimulate our thinking.

I have in mind using snapshots to compare two projects on one page. END_OF_DOCUMENT_TOKEN_TO_BE_REPLACED

Computing critical segments slows down OnePager performance because it requires looking at a the whole MS Project task hierarchy, which generally is a lot more MS Project data than the user has flagged. To avoid this performance cost, unless the user really wants it, we do not compute the critical segment data unless the checkbox “Critical Segments” is checked before we do the import of data from MS Project. The best way to do this is to turn on the feature in the template, before any import from MS Project happens.

Here is a first project view that was created with critical segments turned on in the template, so the data is imported and the computation is performed and displayed: Now, I go into Project-View Properties of this second project view and turn on critical segments; the legend shows that they are on, but they do not show up on the Gantt bars. This is because the critical data can only be computed during an import operation, and just turning on the feature does not trigger an import operation. 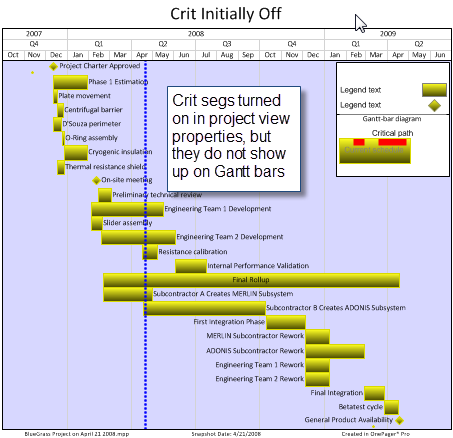 As seen this causes the critical segments to be computed and displayed on the Gantt bars: 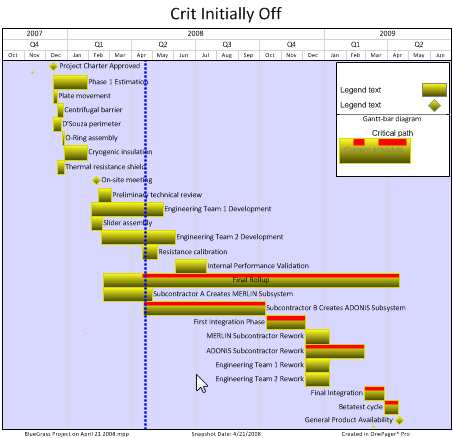 This is a good tip for any users who need to retroactively add critical path data to a OnePager Pro project view without building a new report from scratch!