Next Tuesday, in my double life as a semi-professional classical baritone, I will be singing the 90-minute Verdi Requiem from memory. So I have been spending a lot of my downtime studying music that looks like this: Naturally, this has got me thinking about project management. So what does a set of lines and dots like my Verdi Requiem choral score have to do with planning and executing large, complex projects?

END_OF_DOCUMENT_TOKEN_TO_BE_REPLACED

In this case, I think Tufte has a point, and I must disagree with my colleague Jay. In most cases, if we judge Gantt charts by how well they communicate project status, a legend is probably doing you – and your audience – more harm than good. END_OF_DOCUMENT_TOKEN_TO_BE_REPLACED

We’ve gotten a handful of questions on the Support line about how to change the aspect ratio (width:height ratio) of a project view, to make your Gantt chart appear wider, narrower, taller, or shorter for your audience. Here’s how: In the Project-View Properties menu, click on the Page Layout tab (shown below). At the top, you can manually change “Document width” and “Document height” settings, which for U.S. customers are measured by default in inches. But what, you may ask, should you change the aspect ratio to? It turns out that by asking that question, you have stepped into a debate about the ideal width to height ratio that has been raging since antiquity.

Many scholars believe the ancient Greeks favored a width to height ratio known as the Golden Section. The Danish engineer Vilhelm Marstrand wrote in 1922, “Division of a line according to the Golden Section … implies that a given line is divided in two pieces, a and b, such that the shorter piece … is to the larger … as the longer is to the whole line.” In other words,

Setting b (the width) to 1 and solving for a, we get

Fine, but who cares? Well, scholars have deduced that a number of ancient edifices roughly adhered to the Golden Section, including the Parthenon in Athens: 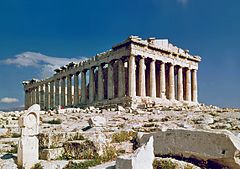 But that doesn’t tell us why the ancient Greeks liked an aspect ratio of 1 : 0.618 – and the Greeks didn’t really tell us either. All in all, the best anyone can come up with is that it just looks pretty.

So what do OnePager project views look like when they adhere to the Golden Section? Here is a project view with a Document width of 14 inches. If we multiply that width parameter by 0.618, we get a suggested Golden Height of 8.65 inches (since OnePager won’t allow the second decimal place, we’ll have to round to 8.7 inches). The project view looks like this: Pretty nice, huh? It also fits perfectly in a PowerPoint slide (those Microsoft propeller-heads must know their stuff!). 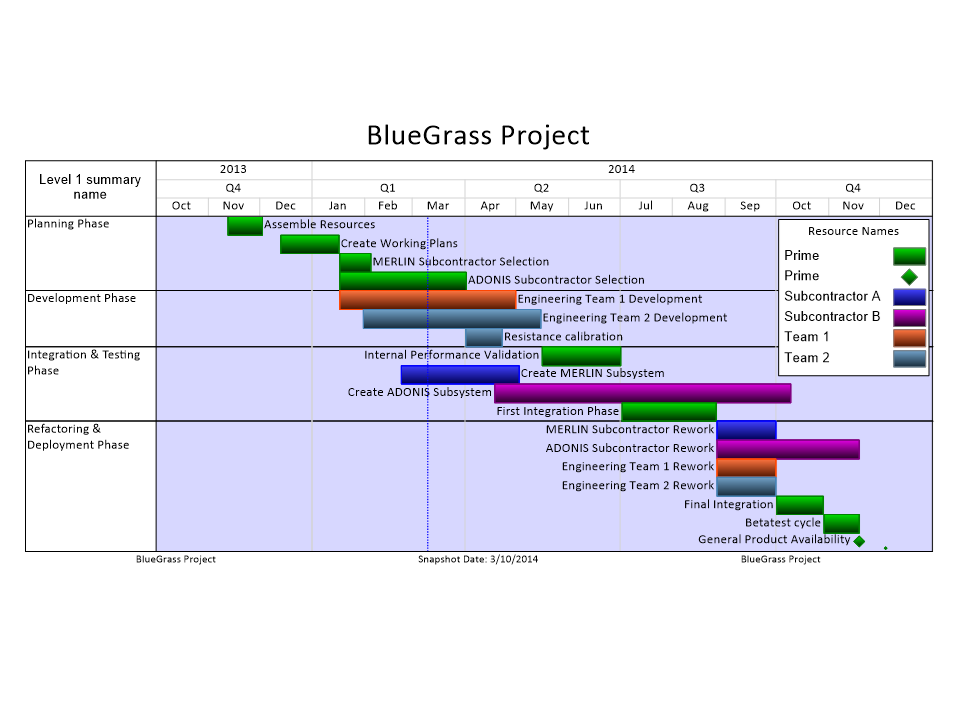 This is not so nice – the project view is obviously stretched out, and if you paste it into PowerPoint there ends up being a lot of white space on the top and bottom of the slide. In conclusion, for reasons we don’t quite understand, it’s clear that if you’re in search of an aspect ratio, you could do a lot worse than the Golden Section. Just multiply your Document width by 0.618 and enter the result as Document height on the Page Layout tab of Project-View Properties. Then go out to lunch – may I suggest a Greek salad?

This article will show you how to make fine adjustments using the Page Layout tab of the Project View Properties form in OnePager 5.1.

After you’ve created a multi-page project view and perhaps looked at it in Print Preview Mode (Page Layout tab), you may want to make detailed changes to certain aspects of your new multi-page document. This can be done from the OnePager project view editor by going to the Home tab and clicking on the Project-View Properties button. Once open, you can navigate to the Page Layout tab per the illustration below: The Page Layout tab above has a complete set of controls similar to what you would expect to see when getting your document ready to print.

Let’s take a look at the project view based upon the current settings above. This is how it would look in Print Preview mode: As you can see, the project view above will correspond to the settings in the Project View Properties Page Layout tab. Now suppose we want to change this to a three by one (3 X 1) page configuration, repeat the time axis on each page, and place the legend on page 1. The necessary changes Page Layout tab are circled below:

And when the three changes shown in the red ovals above are applied, the project view will look like this in Print Preview View mode:

The Project View Properties dialog box is there in the project view editor to give you those fine levels of control you need to create the desired Gantt Chart that meets your schedule communication objectives.

For more detailed information on these controls and others, please consult the OnePager User’s Guide which is available at the Chronicle Graphics website or accessible from the Help menu of the OnePager application itself.

OnePager has always been able to support output of pages of various sizes. Version 5.1 of OnePager makes selection of your page size easier with the Page Layout tab on the ribbon: OnePager 5.1 automatically gets your list of available page sizes from Windows and provides them in the convenient dropdown. Simply click on the Page Size button and select your page size.

When you are ready to print your project view you have two options for accessing a Print Preview: on the Page Layout tab, or by selecting the Print option from the File tab.  Within the File tab, you have another opportunity to change the page size by clicking on the Settings button: At this point you may make changes within the Project View Properties form’s Page Layout tab, or simply accept the Page Layout settings by clicking OK, and then click the Print key above to produce a printed copy of your project view.

OnePager handles all the scaling and positioning of the project view on the page. Look for more blog posts in this space on how to configure the time axes, rows and swimlanes, titles, headers, and footers on multiple pages, a single page, or selected pages.

A couple of customers have e-mailed us reporting that the hidden rows/swimlanes in their project views have mysteriously reappeared. Let’s demystify this!

When you hide a row or swimlane, you also hide all of the task bars or milestones inside that row/swimlane. If, subsequently, the Flag value on one of those tasks gets changed (in Project/Excel) from No to Yes, OnePager by design unhides the row/swimlane so that the newly flagged task appears.

If this is not what you intend, you can easily suppress this unhiding behavior on the Advanced tab of the Project-View Properties menu: Changing this Advanced setting provides a faster way of getting rid of unwanted rows/swimlanes –rather than re-hiding them one by one, which is probably not your first choice of a summer afternoon activity.

As always, we’re eager to hear your feedback about how you’re using OnePager and how we can make your experience better! Feel free to drop us a line anytime at [email protected].

OnePager Pro and Express have several elements such as the title, time axes, rows and swimlanes, headers and footers, and the legend, which can be repeated across multiple pages in your report.

On the OnePager Page Layout tab, there is a section called Repeating Elements, which contains five of these options: 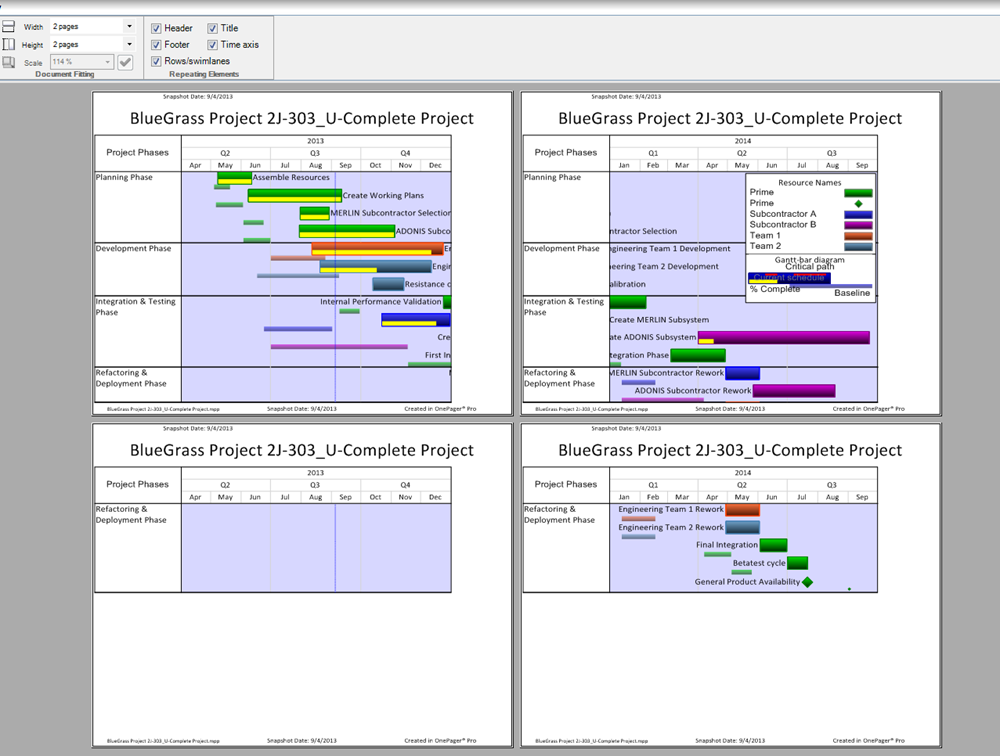 If you uncheck the title, rows/swimlanes, and time axis boxes, the four pages will look like this: Repeating the legend is a more complex option and is configurable under Home->Project View Properties->Legend.

OnePager Pro and Express 5.1 were designed to support large program reports across multiple pages. While the controls and methods for using multi-page features are presented elsewhere in this blog series, we want to show you here how you can improve your project view editing skills with the Freeze Panes feature.

Take the project view below as an example of a project with many tasks: Many people choose to zoom into a single swimlane for easier editing::

Unfortunately, this view is missing (1) the time axis as the top and (2) the swimlanes on the left, which means we have to keep scrolling back and forth while editing to see where we are. The Freeze Panes feature is the answer to this problem.

The controls for the Freeze Panes feature are on the Page Layout tab. There are several options to select from as shown here:

If we turn on the Freeze top time axis option, then the time axis will appear, no matter where we scroll:

The Freeze Panes feature has no impact on how the project view will appear when copied to PowerPoint or printed. The feature is simply there to make editing easier.

OnePager Pro and Express 5.1, as we mentioned elsewhere, support your need to insert, move, and remove page breaks in your project reports. OnePager also lets you  specify the number of horizontal and vertical pages in your document. In this mode, OnePager will take the number of pages you specify and place the horizontal and vertical page breaks for you.

To illustrate this, look at the single-page project view below and the Page Layout tab: Now, suppose you want to configure the project view above into four pages: two horizontal and two vertical. To do this, just make the changes to the Document Fitting section of the Page Layout tab by selecting 2 pages for the Width and Height as shown below:

When these two selections are complete, the project view will look like this in Page Break View mode: As you can see from the Width and the Height dropdowns, you have many choices including an “Automatic” choice where OnePager will examine the project view and will suggest an appropriate number of pages for you.

For example, for project views that have a lot of tasks extended over a relatively short time frame, selecting the “1 X Automatic” combination for Width and Height is a good way to set up a long (vertically) but narrow (horizontally) multi-page project view like the one below shown in Print Preview Mode: The new multi-page feature in OnePager Pro and Express 5.1 gives you tremendous flexibility with your project reporting.

In a previous blog post, we talked about adding and removing page breaks. In this post, we’ll illustrate how to manually move page breaks to fine-tune the pagination of your report.

To move the vertical page break, just hover your mouse over the page break. It will automatically change to a double arrow. Clicking and dragging will allow you to move the page break left and right: When you release the mouse button the page break will be established in its new position and the previous vertical page break position will disappear.

When you look at the project view using the Print Preview mode, the four pages will look like this: At this point you may want to make further adjustments to the page breaks, remove them, or add additional page breaks. You have a great deal of flexibility to configure the pages in ways that meet your presentation needs.