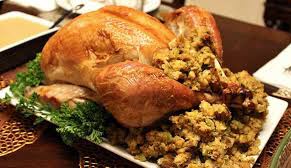 In the spirit of Thanksgiving here in the US, we’ll continue our “Gantts, Lies, and Videotape” series with a discussion of stuffing — or dressing, if you are not a big fan of Salmonella.

Stuffing may have a home at the Thanksgiving table, but it has no place on your Gantt charts. In fact, stuffing your Gantt chart full of a disproportionate number of tasks is another way that a lot of people inadvertently lie in their project reports. Here is an example of a Gantt chart that has been “stuffed”: This chart doesn’t look bad, nor is it overly cluttered, but it does misrepresent the complexity of the project because 67% of the tasks roll up to the “Research” phase. The chart glosses over the other phases of the project — like, I dunno, Implementation — implying that they aren’t as important, or they won’t take as much work.

Many innocent project managers build “stuffed” Gantt charts because they want to focus their audiences on the portion of their project that is in flight. Stuffing a Gantt chart proportionally (including lots of tasks for all the phases) is more accurate, but it also eliminates the simplicity and focus that the first chart is trying to achieve.

The answer lies somewhere in the middle. Task stuffing is an acceptable thing to do as long as you give your audience visual cues that stuffing is taking place. Consider the following:

This is the same set of tasks, but with some formatting applied so that summary tasks and detail tasks stand out from each other. In doing this, we see that the research phase has been “drilled down” while the other phases have been “drilled up”. Color-coding by phase is also useful here, since the eye can see that all of the smaller sub-tasks really just roll up to the main phase summary.

So, when it’s time to focus your audience, watch out for task stuffing. Happy Thanksgiving.