In this case, I think Tufte has a point, and I must disagree with my colleague Jay. In most cases, if we judge Gantt charts by how well they communicate project status, a legend is probably doing you – and your audience – more harm than good.

Let’s think of this issue in terms of how hard our typical audience member has to work to understand what’s happening on the screen in front of her. Your goal as a project manager should be to make your audience work as little as possible to understand the information you’re trying to convey.

In a typical Gantt chart with a legend like the one below, as our audience member sees each color on the task bars in the chart itself, she has to scan her eyes over to the legend to figure out what each color means (here, we are color-coding by resource). In most cases, her eyes are moving quite a bit, both vertically and horizontally. 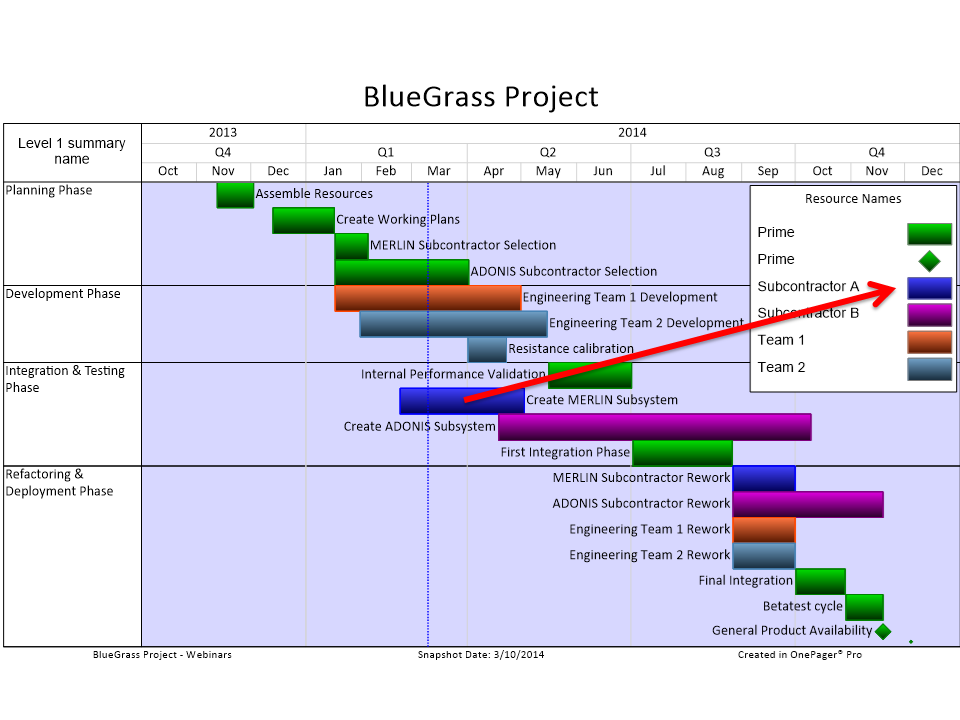 Now compare this to a Gantt chart without a legend, shown below. All I’ve done is replace the legend with a row label for “Resource Names” – so there’s the same amount of raw information on the screen. Our beleaguered audience member still has to do some horizontal scanning (to the left now rather than the right), but she hardly has to move her eyes vertically at all. On average, for most task bars, it will take less time and less eyestrain for our audience member to figure out what the colors mean. True, we have added extra words to our Gantt chart. If a picture is worth a thousand words, trading in a picture for about 25 words’ worth of row labels is a pretty bad investment! But (here again I must reluctantly agree with Tufte), the primary purpose of a Gantt chart is not to be beautiful, it is to communicate project status. The second Gantt chart, without the legend, accomplishes this mission more effectively than the first … and, I have to say, it still looks pretty good!