Symptom: OnePager will not Launch

After recently installing an Office Update from Microsoft, which was probably done as a part of a broader Windows Update, OnePager and other applications fail to launch, or generate error messages. In OnePager's application logs, you will see a message like this:

On November 12, 2019, Microsoft released a faulty security patch to Microsoft Office. The result of this patch is that OnePager and any other Windows applications that make of Microsoft Office data objects are no longer able to write data.

Microsoft is aware of this urgent issue and is working on a second patch to reverse the damage done by the first patch. However, it does not appear that the issue will be resolved as quickly as we would like. In the meantime, Microsoft recommends rolling back the flawed security update. Most end users do not have the rights to do this, but helpdesks do. Given the gravity of this issue and how widespread it is, many helpdesks are already in the process of reversing this Microsoft patch company-wide. We have provided instructions on how to do this below.

This security patch was pushed out on November 12, 2019 as a part of a broader Office Update, and your helpdesk will be able to determine how it was installed on your system so that it can be reversed.

We, and many other software vendors, have escalated this issue to Microsoft, encouraging them to come up with another workaround or hotfix beyond the security patch rollback. If such a workaround becomes available prior to Microsoft's next patch release, we will update this article with that information.

How to Fix It

Once you have determined these two pieces of information, follow the instructions that match your Office installation method:

IMPORTANT: Once you have fixed the underlying issue, you also need to temporarily disable Office updates to keep the issue from happening again until Microsoft has made their fix available.

If your version of Office was installed using an MSI file, you should be able to remove the flawed security patch from Microsoft and resume normal operations, but we also recommend installing one of the newer security patches that Microsoft has made available to fix the issue as soon as possible.

To remove an installed Office Update:

As of December 9, 2019, all versions of Office have finally been patched by Microsoft, so most users should be able to upgrade instead of downgrading.

Find your current Office version and build number to determine fix to install:

Here's how to use Click-to-Run to change your Office version:

If you have rolled back to an earlier version instead of rolling forward to a newer version that has been fixed, you run the risk of Microsoft reinstalling the bad update again without you knowing. To prevent Microsoft from re-updating with the broken patch again, you will need to turn off Office Updates. These are different from Windows Updates. To turn these off, launch Excel, and go to File > Account > Update Options. Chose to Disable Updates until Microsoft has fixed this issue. 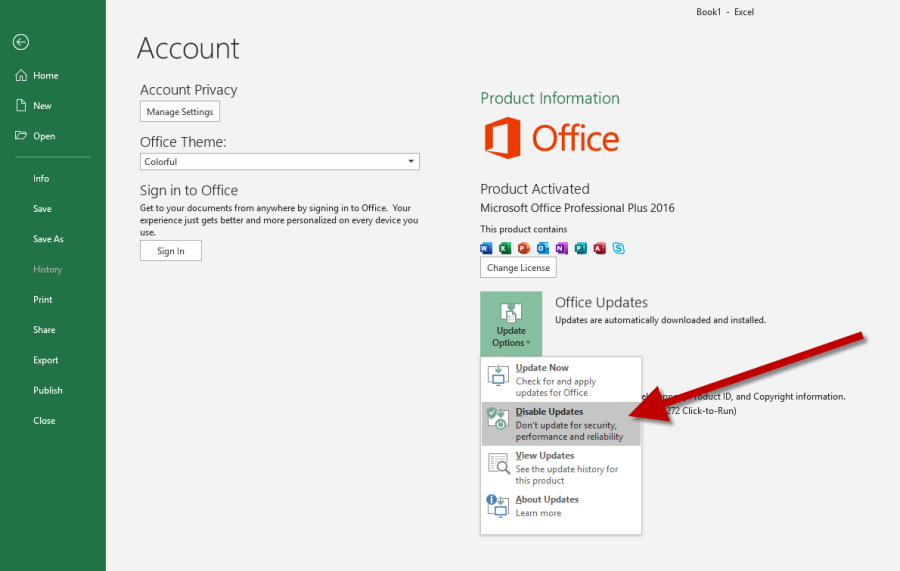 Once you have installed the complete fix from Microsoft, you can turn updates back on.