Differences between charts, snapshots, and templates

OnePager lets you use the same underlying project plan to present different Gantt charts or timelines to different audiences, and also lets you create a standard style to be used across different Snapshots. Charts, Snapshots, and Templates are at the heart of these capabilities. First, some definitions:

How Snapshots Relate to Charts

Every Chart will contain at least one Snapshot, but most project contain several Snapshots. The hierarchy of Charts and Snapshots is shown below:

Within each Chart, there are multiple Snapshots at different points in time. This means that the project manager has been versioning each one of the three Charts over the last few months. OnePager stores all Snapshots in historical order, so if someone needs to see what a Chart looked like one or two months ago, it is easy for the project manager to pull up an earlier Snapshot and compare it to the current project schedule.

There is no limit to the number of Charts or Snapshots you can create. You have complete control over the frequency of Snapshots, whether you want to create a new Snapshot each week, month, quarter, or even a Snapshot each hour.

How Templates Relate to Charts

Templates act like a stylesheet to define a common reporting format across many Charts. They allow an organization to pick a standard color palette, fiscal year, grouping/sorting scheme, and even a common set of conditional formatting rules. Because Templates are project-agnostic, they do not contain any project data or any manual customizations that are made to individual tasks. These individual customizations are contained within the Chart, not the Template.

The following diagram shows how Templates relate to Charts, and the Snapshots within them: 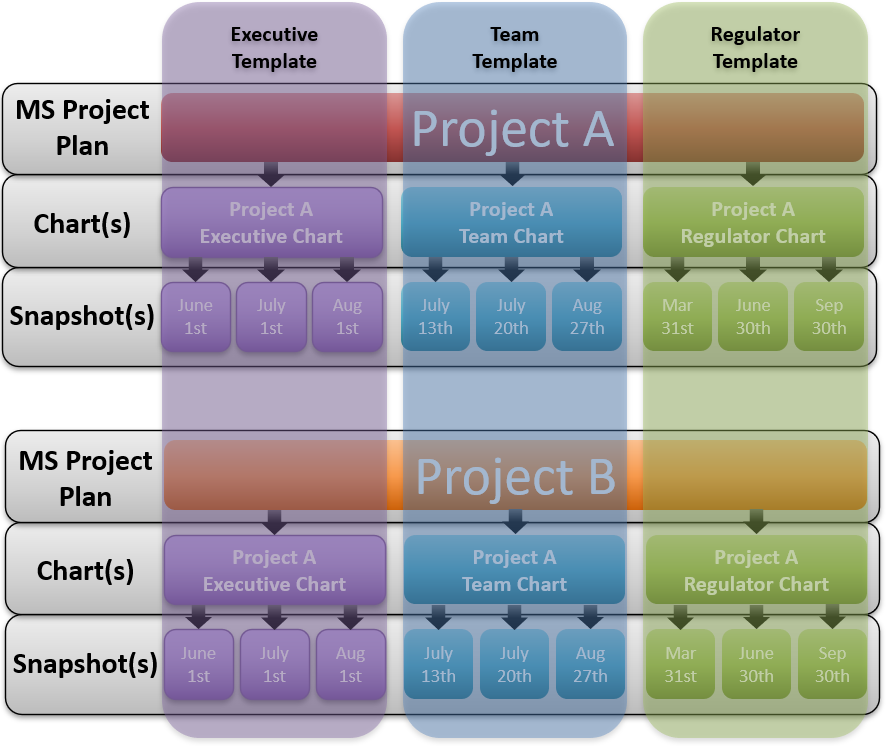 Even though these projects are separate, they will have similar formatting, layout, and other characteristics.